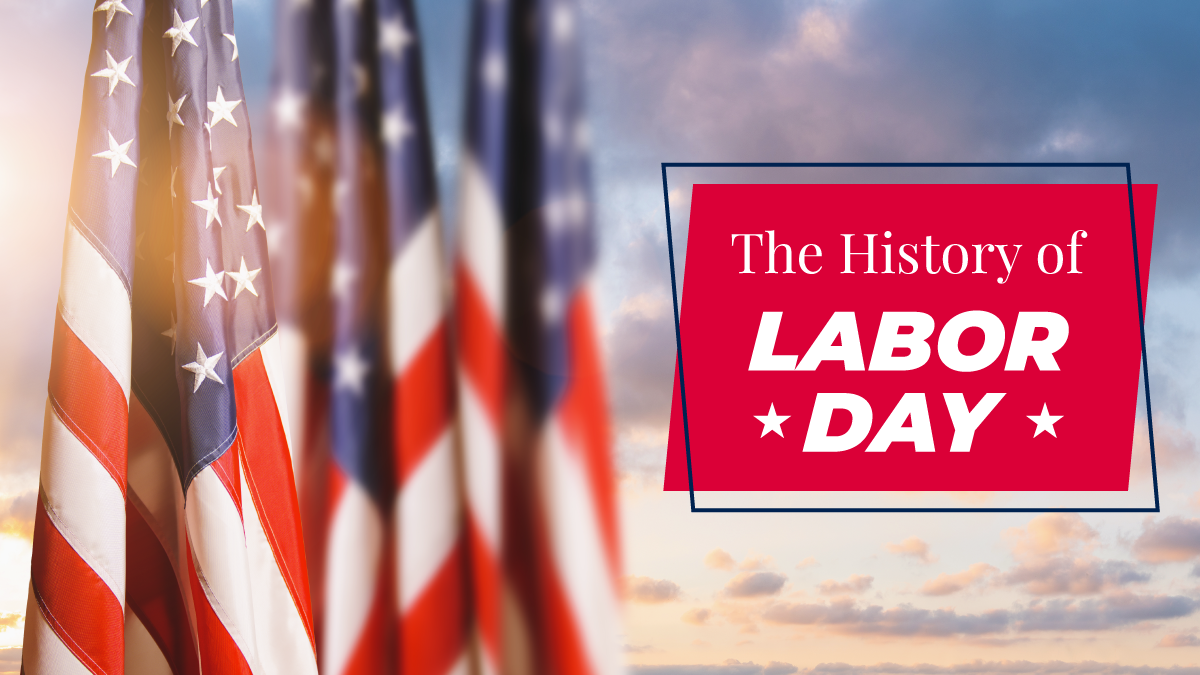 Every first Monday in September, we celebrate Labor Day to remember the American Labor Movement and to honor the achievements and contributions of America’s working class to the development of our nation.

Americans haven’t always had the right to fair wages or a safe workplace, nor the luxury of paid vacation days. For over three centuries, employees have fought to improve working conditions, and today many of us have forgotten why we get a three-day weekend every beginning of September.

Toward the end of the 18th century, America’s agricultural society transitioned into an industrialized urban economy. Goods that once required days to craft by hand, now took a matter of minutes thanks to the introduction of new machinery and techniques.

Fueled by the game-changing use of steam power, the First Industrial Revolution quickly spread from Great Britain to the rest of the world. With it, came one of America’s most dismal times in labor history. Skilled tradespeople were no longer needed as large factories popped up throughout major cities. With hundreds of workers out of a job, factory owners had their pick of cheap labor.

Unhindered by government oversight, employers operated under no regulations and had no financial reason to protect their workers. This birth of laissez-faire capitalism made laborers expendable in the eyes of employers.

By the late 1800s, the average laborer in America worked 12-hour shifts a day, seven days a week, and made around one dollar per week. To put this in perspective, monthly rent for a four-room house in 1870 could range anywhere between four and 25 dollars.

Safety hazards were rampant. Machinery lacked fencing, ventilation was poor, and temperatures inside ironworks commonly rose above 130 degrees. Factories were dirty, dusty, and dark – the only light source was sunlight pouring in through a few windows. Workers didn’t receive break times or vacation, and on-the-job injuries typically resulted in termination without compensation.

To help combat poor wages, children were often sent to work in mines and factories instead of attending school. Employers preferred to hire children because they were generally more obedient and easier to control. Additionally, children made considerably less than their adult counterparts for performing the same duties.

The Birth of Labor Day

In response to these poor working conditions, labor unions were formed and became more prominent. They started planning rallies and strikes to force employers to raise wages and decrease the number of hours worked per week.

Many events quickly became violent, and the Haymarket Affair of 1886 is a good example, in which protesters turned into a riot after someone threw a bomb at the police. While some events such as the Haymarket Affair were seen as setbacks for the organized labor movement, others help established popular traditions. On September 5, 1882, the first Labor Day parade was held in New York City, which saw 10,000 workers take unpaid time off work to march to Union Square, from City Hall.

This concept of a mass celebration for the working man moved over other industrialized cities across America, and legislation was passed in many states, to recognize the first Monday in September as a holiday.. Twelve years later, Congress made Labor Day a federal holiday after a milestone historical moment in the U.S. labor industry put the rights of workers’ in the spotlight of national news.

As a result of the economic depression beginning in 1893, the Pullman Company, manufacturer of the nation’s most popular railcar, decided to cut costs by firing union workers and lowering labor wages by 25%. Employees fought back by joining Eugene Debs, leader of the American Railway Union (ARU), in organizing a national strike against Pullman.

On June 26, 1894, the boycott by the ARU on all Pullman’s railway cars crippled railroad transportation nationwide, and ultimately halted the economy. To put a stop to the Pullman strike, President Grover Cleveland dispatched federal troops to Chicago, which led to a wave of violence that left more than a dozen workers dead.

As a result of the Pullman strike, the federal government reevaluated its involvement in labor unions and workers’ rights. President Cleveland signed S. 730 into law on June 28, 1894, officially making Labor Day a federal holiday.

Today, the U.S. celebrates Labor Day with barbeques, fireworks, parades, and picnics. For many citizens, especially kids and college students, Labor Day represents the ending of summer, while also marking the beginning of the back-to-school season.

Ironically, Labor Day weekend is one of the busiest retail weekends of the year. Sadly, this means retail workers, a group that makes up roughly 6% of the country’s workforce, have to work longer hours on the day dedicated to worker appreciation.

As you celebrate this Labor Day with backyard barbeques and firework displays, remember why it exists – to recognize and appreciate the hard-working Americans who helped build this country and the sacrifices they made to improve your working conditions. As you stock up on party essentials, thank grocery store and retail employees for all their hard work, keeping in mind that many of them will still be punching a timecard on Labor Day.

Subscribe to our blog to learn more about healthy living.