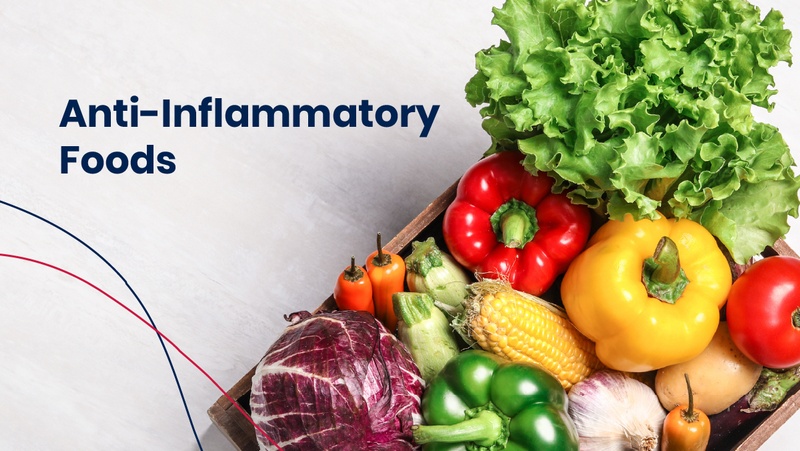 The human body has many natural responses designed to help it fight off harmful entities, such as toxins, injuries, and infections. One of these processes is inflammation. This is the body’s way of fighting off ailments, especially when it comes to damage to the body’s muscles and cells, which can lead to chronic inflammation. Sure, there are medications and other therapies to help ease inflammation within the body. Although many patients are asking, “what is the best natural anti-inflammatory treatment option.” The answer? A well-balanced diet that includes anti-inflammatory foods.

What is Chronic Inflammation?

Chronic inflammation is defined as long-term inflammation that lasts for prolonged periods of time, which can include several months to several years. In contrast, acute inflammation often lasts a few days; however, it’s a rapid onset.

Unfortunately, many of these symptoms can result from other underlying health concerns, so it can be difficult to pinpoint the cause of your symptoms unless you see a doctor.

Acute inflammation is the body’s way of fighting off infection and speeding up the healing process. However, when inflammation becomes chronic, it can start to attack the body’s already healthy tissues and organs.

Some risk factors can impact whether or not chronic inflammation could become an issue, including:

Each of these conditions can present a variety of other symptoms besides chronic inflammation. So, you’ll want to make sure you are documenting everything. This will help your medical team guide you in the best treatment options for your unique needs.

Depending on the cause of your chronic inflammation, treatment options can and will vary. This is because your medical team will need to consider all other symptoms. While some patients will require specific treatments that will include various medications, several natural treatment options are available, such as an anti-inflammatory diet for chronic pain and inflammation.

It’s also worth noting that regular exercise is also an excellent natural treatment option for those suffering from chronic inflammation.

Doctors and the scientific community are also finding that one of the fastest ways to reduce inflammation in the body is through the consumption of anti-inflammatory foods.

What are Anti-Inflammatory Foods?

The first step is to stop thinking of this as a search for an anti-inflammatory diet food list. Instead, you want to think of this process as a lifestyle change because a “diet” suggests a temporary change. When dealing with chronic inflammation, you don’t want a temporary solution – you want a long-term solution.

Research has shown that eating anti-inflammatory foods and maintaining a regular exercise routine has many benefits to those with several health conditions.

In a recent study on the effects of anti-inflammatory foods in pre-diabetic and diabetic individuals, participants not only noted modest amounts of weight loss – which is known to help improve chronic inflammation – but they also showed improvements in cardiovascular and inflammatory biomarkers. It also aligned with previous studies suggesting that diets with low-glycemic index helped improve glycemic control in individuals with pre-diabetes and type 2 diabetes.

Unfortunately, disease-related fatigue is a significant problem for patients who suffer from both psychiatric and non-neurological diseases, such as depression and chronic pain. As a matter of fact, 90% of individuals who fall under this patient population are said to experience disease-related fatigue that can negatively impact their day-to-day life. Recent studies suggest that an anti-inflammatory diet for chronic pain does help many patients and shows some improvement in overall fatigue for these patients. However, more research still needs to be conducted into the direct effects of anti-inflammatory foods and fatigue itself.

Anti-Inflammatory Foods: What Works and What Doesn’t

Anti-inflammatory foods can and do help millions of individuals manage their chronic inflammation. Unfortunately, when many individuals are told to consider an anti-inflammatory diet, they immediately believe they must restrict their food intake or cut entire food groups from their diet. However, that simply isn’t true.

Yes, while many foods need to be removed when deciding on an anti-inflammatory diet, what you can have far exceeds what you can not have. What’s more, many of the “no” list items often involve foods that should be eliminated in a typical healthy diet for any individual.

So, what are considered “good” foods and “bad” foods when it comes to anti-inflammatory foods?

When discussing anti-inflammatory foods, there is a lot of talk about what not to eat. Instead of focusing on what you could be missing, it’s crucial to focus your attention on the many things you can have, including:

What are the Worst Foods for Inflammation?

When it comes to the foods you need to avoid when looking into anti-inflammatory foods, the number one rule is to say no to anything processed. That means no processed:

You’ll also want to avoid things like meats that are heavy in omega-6 fatty acids, such as burgers and steaks, processed meats such as sausage or hot dogs, fried foods, lard, shortening, and margarine. Again, if you have any questions regarding foods to avoid, you’ll want to speak to a registered dietitian.

Just because you are exploring anti-inflammatory additions to your routine doesn’t mean you are limited to just drinking water. Yes, while it’s crucial you still get your daily recommended amount of water in, you can also sprinkle in a few of these drinks throughout your day or week:

What are the Worst Drinks for Inflammation?

When trying to decide which drinks to include in your anti-inflammatory dietary routine, the primary drinks you want to avoid include:

Again, this list is considered one that any healthy individual should be avoiding.

The anti-inflammatory pyramid is exactly what it sounds like. It’s a set of guidelines similar to that of the food pyramid that gives suggestions of what’s approved to eat, how often, and in what amounts.

This particular diet is high in fruits, vegetables, beans, nuts and seeds, whole grains and olive oil. This diet is also considered heavily plant-based, not meat-based, so you are going to notice that only a moderate amount of dairy, poultry, and eggs are included, along with a variety of fish.

While there are several varying low-carb diets, they all share some of the same basic principles. They cut out all processed carbs and sugars. Instead, you focus on eating whole foods.

As vegetarian diets eliminate most processed foods and meats from your dietary routine, they are considered a common anti-inflammatory diet.

Is an Anti-Inflammatory Diet Right for You?

You should never make a massive dietary change without consulting a medical professional. Even with the best intention, any lifestyle change can have both positive and negative effects on your day to day life. So, before deciding whether or not an anti-inflammatory diet is right for you, consult with either your primary care physician or a registered dietitian. They’ll be able to guide you on the path to a happier, healthier you.