Home > General > Do Antibiotics Work on the Flu? 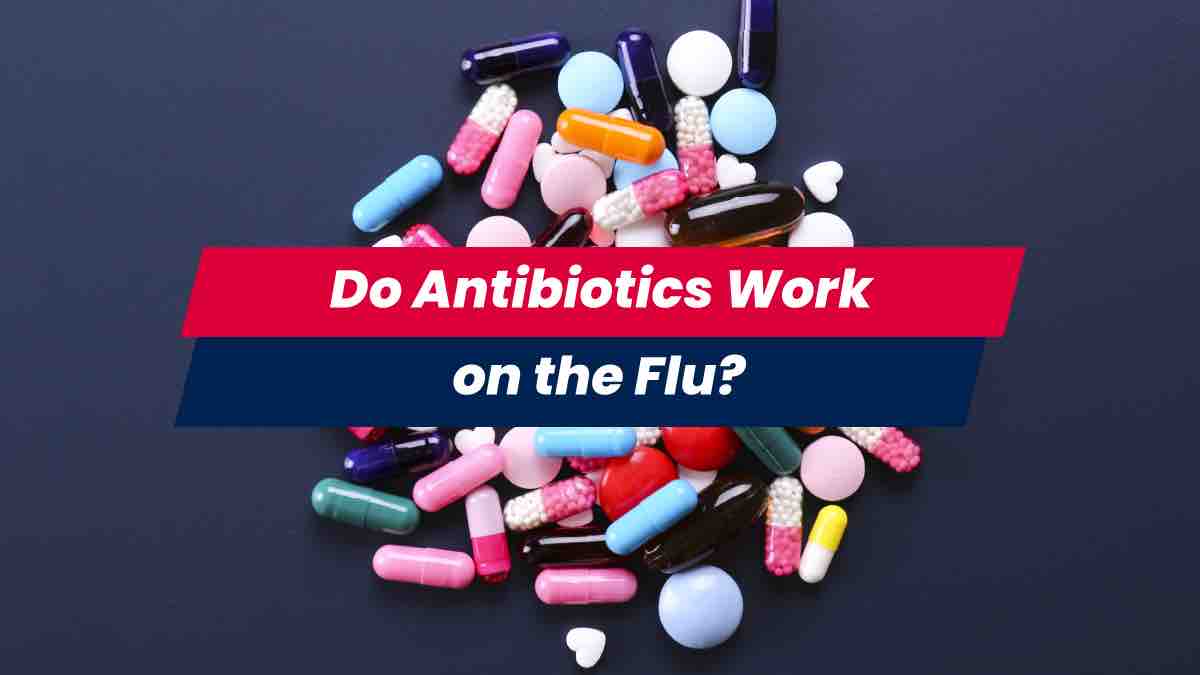 The flu, also known as the influenza virus, affects millions of individuals each year at varying severities. The virus that causes the flu takes on many different forms, though it is typically split into type A and type B – with subtypes of each circulated each year. There are type C and type D influenza viruses as well. They aren’t nearly as widespread. Type D is known to only infect cattle. Now, when people fall sick with the flu, symptoms can range from simple cold and flu symptoms (aches, chills, low-grade fever, and fatigue) to more severe symptoms (vomiting/diarrhea, dehydration, and shortness of breath). When these individuals start to feel severely uncomfortable, they turn to the doctor and expect an antibiotic to help them feel better. But do antibiotics work on the flu?

What are Antibiotics Used For?

When people start to feel run down and sick, they often turn to their primary care provider to help them alleviate their symptoms and return to their day-to-day activities. Unfortunately, most patients believe that they require antibiotics to feel better.

Most don’t understand that antibiotics are used to treat certain bacterial infections – not for viral infections, such as the common cold and the flu.

Antibiotics typically work in one of two ways:

Why Antibiotics Aren’t Being Used as Frequently

For instance, antibiotics used to be used to treat most sinus and ear infections, but doctors are finding that many of these conditions will go away on their own without the use of antibiotics.

Since many bacterial infections will go away on their own and symptoms can be treated with over-the-counter medications, more medical professionals are no longer prescribing antibiotics because they can have some adverse side effects and contribute to antibiotic resistance.

Antibiotic resistance is becoming a global problem. Scientists are finding more and more bacteria have evolved and are now stronger, making the standard antibiotics less effective when used to treat these infections. Research shows that some of the most prevalent strands of bacteria have become increasingly difficult, if not impossible, to treat because they have evolved to a point where antibiotics simply have no effect. Some of these bacteria include:

With antibiotic resistance becoming such a global issue, it should come as no surprise that more and more medical professionals will discourage their use.

What Would a Doctor Give to A Patient to Relieve Flu Symptoms?

If your doctor isn’t prescribing you an antibiotic to treat flu symptoms, then you may be left wondering what else you could do to get better. The good news? Most cases of the flu will pass on their own with plenty of rest, fluids, and maybe some over-the-counter pain and fever medications.

However, if your symptoms continue to persist with little to no improvement, will a doctor prescribe anything to patients? In these situations— or if you’re considered a high-risk patient— your doctor may prescribe you an antiviral drug to shorten the time you’re sick and make symptoms milder.

Antiviral drugs are not the same as antibiotics and must be taken early to prevent the illness from worsening.

How Do Antiviral Drugs Work?

Antiviral drugs are an effective treatment for the flu because they  interfere with the virus’s spread from one cell to the next. When the virus cannot spread and replicate, it begins to die off, and the patient’s symptoms begin to diminish.

While it is recommended that patients who require an antiviral drug to  fight off the flu get treatment within a day or two of symptoms first appearing, research shows that taking it later can still help them fight off the infection and feel better faster.

As with most medical treatments, there are some noteworthy side effects of antiviral drugs, including:

Can You Get Over the Flu Without the Use of Antibiotics?

If you are dealing with flu symptoms, don’t go rushing to your doctor in  search for an antibiotic. Chances are, they aren’t going to prescribe you one. If they prescribe you anything, it will be an antiviral.

However, unless you fall into the high-risk category, your primary care provider will likely suggest going home and letting your body fight off the virus on its own. Should that be the case, there are several options to help you feel better.

The first thing you want to keep in mind is that your body is actively fighting off an invading body, which will leave you feeling extremely fatigued. Allow yourself the time to rest and let your body’s immune system do its job.

You also want to make sure you are giving the body the necessary fuel to function properly and fight off the infection quickly. That means flushing your body by drinking plenty of water and keeping your nutritional needs in check.

Should you still feel miserable, you can use various over-the-counter medications to help you treat the most troublesome symptoms of the flu, including:

There are also plenty of other options to help with combinations of symptoms such as painful congestions, loosening of mucus in the sinuses and chest, etc.

Always Consult with Your Primary Care Physician Before Self-Medicating

Sure, while many patients will be just fine treating their flu symptoms with over-the-counter medications, you should always consult with your primary care physician before beginning any drug regimen.

This is especially true if you are taking any prescription medications or have other health concerns that could be affected by certain over-the-counter medications.

So, even if you feel you can easily manage your symptoms yourself, speak with your medical team first and get the okay before starting any at-home treatment plans.