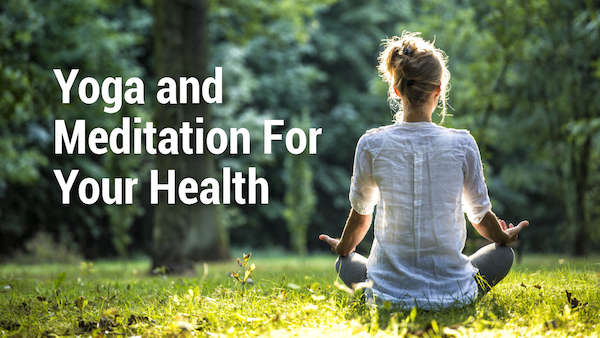 Yoga relies on the principle that the mind and body are intimately related. The combination of stretching techniques, known as asanas, and breathing or meditation exercises – pranayama – affects multiple body systems and work together to produce the physical and mental benefits associated with yoga.

The hypothalamic-pituitary axis (HPA) consists of the hypothalamus, pituitary gland, and adrenal gland. The complex is a significant component of the neuroendocrine system which controls reactions to stress and other bodily processes, including digestion, mood and emotion, and immune response.

Stress stimulates the HPA and sympathetic nervous system, increasing excitatory hormones like cortisol and adrenaline. Increases in these hormones produce many of the harmful effects of stress, such as the release of inflammation-promoting chemicals called cytokines. Asanas increase parasympathetic activity, which counteracts HPA stimulation. Additionally, hypothalamic stimulation releases mood-boosting hormones, such as serotonin and dopamine.

Benefits of Yoga and Meditation on the Mind

Yoga is known for improving flexibility and increasing strength and muscle tone and can support many other health benefits.

There is increasing concern over age-related memory loss as baby boomers reach old age. The stress of chronic inflammation on the body plays a role in the development of several conditions, particularly Alzheimer’s disease. Yoga reduces inflammation by lowering the body’s sympathetic system and increasing its parasympathetic response.

The effects of yoga on anxiety and depression have been widely studied. Various neurotransmitters control your mood. One of these neurotransmitters, gamma-aminobutyric acid (GABA), is the subject of several mood-related studies. As an inhibitory neurotransmitter, GABA is responsible for reducing neural activity in the brain.

Sleep and mental health are closely related. Lack of sleep affects your ability to think and decreases mood. Roughly one in three Americans report difficulty sleeping, and approximately half of insomnia cases are depression-related. Many anxiety disorders, such as obsessive-compulsive disorder (OCD) and post-traumatic stress disorder (PTSD), are also associated with poor sleep.

The physicality of yoga tires the body, GABA calms the mind, and a reduced heart rate promotes quality sleep. Surveys have shown that Americans found that many people who did yoga reported better sleep, and a group of post-menopausal women reported reduced insomnia severity after yoga.

Along with the current opioid epidemic, substance abuse disorders are on the rise in the United States. Repeated use of various types of drugs can permanently alter the brain’s chemical messaging and slowly destroy vital systems and functions, leading to disability or death.

Yoga and Meditation can bring you numerous health benefits and possibly improve your overall quality of life.  Consider speaking with your doctor if conventional therapies aren’t working and how adding Yoga to your regular health routine may health. You should always consult your doctor before changing your diet or exercise and to discuss your mental health.